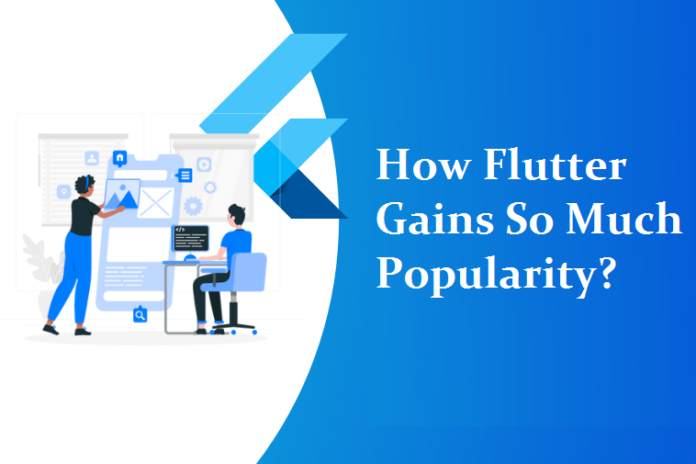 Flutter is the cross-platform app development kit from Google that gained tremendous popularity in recent years. While React Native was reigning as the leading and most loved cross-platform development framework until 2017, Flutter, with its new widget-based modular development approach, challenged it and is on the way to becoming the most preferred framework.

The developers and the businesses increasingly prefer Flutter for app development because of its “build once and run everywhere” approach. Many startups now prefer to switch to Flutter just because they can reuse the same code across iOS, Android, web, and desktop platforms. Unlike React Native and other cross-platform development frameworks, Flutter and iOS and Android apps can be used for web and desktop apps.

Suppose you want to hire flutter developers for your next app project. In that case, you can very well consider revisiting the most important reasons that made Flutter so popular and loved as a technology. How does Flutter appear to be more powerful than most other development technologies? What are the key aspects that gave Flutter such an edge? Let’s explain this one by one.

It needs hardly any brainstorming to understand the value propositions of cross-platform app projects. Building one app that runs on iOS and Android is extremely beneficial for reaching out to a broader audience. This typical “run the same code everywhere” approach has been extended to web and desktop platforms. The same code of a Flutter app can be reused across iOS, Android, web, and desktop platforms such as Windows, Linux, and macOS.

It is already well known that building one native application can mean neglecting the larger market while creating constraints for reaching out to a wider audience. On the other hand, building separate native apps for each platform can be resource-intensive and time-consuming. This is why for outsourcing app development projects, Flutter’s approach of code reusability appears to be an indomitable factor.

Let’s not forget that Flutter’s worth for cross-platform app projects goes well beyond just the portability of the codebase. In contrast to several cross-platform development libraries and SDKs like React Native and Xamarin, Flutter also helps build reusable user interfaces (UI). Flutter comes loaded with a Skia rendering engine that can render all UI components without platform-specific constraints.

As far as app performance is concerned, Flutter has the edge over most other SDKs and libraries. Flutter allows developers to do many more things than most other platforms. The Skia rendering engine is extremely powerful for rendering different platform-independent UI components, ensuring smooth and speedy performance.

The Skia rendering engine is well known for its awesome ability to render all types of components across all kinds of platform-device combinations. Just because Skia comes inbuilt within Flutter rendering the UIs across all platforms can be highly easier.

There is another key reason for Flutter apps to perform so well across many platforms. Flutter framework helps compile native code with the ARM machine code used by the Dart native compiler.

Clean coding and readable syntax of the Dart programming language make it developer-friendly. Due to less coding footprint, the app becomes lightweight and performance-optimized while ensuring the least number of coding errors and bugs.

Because of its modular development approach, Flutter perfectly fits into MVP app projects. The widget-based development of UI and rendering the platform-independent components with the built-in rendering engine, these two aspects made Flutter the ideal framework for MVP app development.

Flutter being a Google-maintained technology, completely adheres to material design architecture. You can use it to develop a wide array of beautiful and expressive user interfaces that are automatically adapted by various platforms.

Flutter makes this possible through a wide variety of widgets that can be used to build different interfaces for multiple platforms. The widgets built for cross-platform Flutter apps can automatically reuse key components of both iOS and Android platforms. Because of this flexible UI building capability, Flutter widgets can introduce multiple platform-specific components like navigation, scrolling, icons, etc.

Flutter cross-platform development also makes things easier for the developers by providing Hot Reload features. Without re-running the app, developers can insert code in the already running app and instantly evaluate the changes. This ensures faster testing and debugging of apps with ease.

Thanks to the Hot Reload feature, developers can test their code without losing the running state of the app. This ultimately gives complete freedom from the obligations of disrupting the app’s functioning while making changes.

When it comes to accommodating higher volumes of traffic, Flutter is an excellent framework because of the integrated Google Firebase backend support. Firebase as a backend solution is tremendously scalable. Most importantly, Firebase helps reduce the size of the app updates for smooth syncing resulting in superior app performance.

So, Flutter brought a paradigm-shifting approach to the cross-platform development world. Flutter is versatile, flexible, and powerful enough to help your app stay ahead of the competition with a superior user experience. No wonder both startups and large business brands are equally embracing Flutter for app development projects.